Collaboration with the help of Bali Street Kids Project and German (and one Dutch) business students from Udayana University to help a special needs family from Singaraja.

I was recently requested to assist in developing an ”Eco-Project” by a group of German International students attending Udayana University in Denpasar. As part of their school curriculum (business students in this case), they were required to assist a community organisation to fund-raise (from my understanding) through making sales on/with an “ecological product”.

Following our discussions, we agreed to work together to make an “eco-product” (bamboo stars) which would provide some short-term employment for the father of a family planning to come to Denpasar to find school/therapy for Kadek, their Autistic/ADHD child, who I was first connected with through our neighbour, Bali Street Kids Project’s founder Putu (who has helped us so much during our construction project). Kadek had been excluded from school in their hometown (Singaraja) and Putu (founder of Bali Street Kids) wanted to help them find a solution for Kadek’s schooling and to help support the family to resettle in Denpasar. She did this by having the family stay at the orphanage while they searched for schooling/therapy for Kadek and employment for his parents.

The students said their could help sell a product being made from bamboo or an eco-substance, and after some discussion we decided on the bamboo stars (which Johannes, one of the Bali Street Kids from Sumba, had made one afternoon earlier on during our construction from the bamboo trash-pile. (Amazing right). So this little idea was born and the students are paying the bapak per star he is making (the other 50% is going into a fund to pay for therapy for Kadek) from sales to their fellow students.

Kadek is a non-conformist 😋 and was being given medication to slow him down a bit. His parents took him off medication totally after they first joined us at the bamboo house and I saw a free spirit unleashed: He has dancing eyes; Love of power tools; Enjoyment at playing catch with coffee sachets and getting me to shoot at our cardboard target across the gangway (street) with a bow and arrow… His laugh is infectious and his avid kidding and ‘annoyances’ kept me perpetually on my toes.

A balinese friend visited in the first few days from when he and his father joined us at the bamboo house who could read Kadek’s aura and energy. Kadeks father confirmed everything said by him – from a traumatic occurance to the mother during pregnancy to Kadek talking to spirits (people not in physical form), to an incomplete balinese ritual for the umbilical cord after birth.

I watched Kadek’s face as my friend took a small bottle of oil from his pocket and made a prayer and put the oil on a few points around Kadeks neck and face. It was like horror/trauma filled his face and then just as quickly vanished… And after that he seemed to have a “lighter” energy. The ‘sinister’ look I had observed disappeared.

And it was full-bawl from there… Finding ways to engage Kadek through doing activities for sensory engagement like sanding, splitting bamboo, music/sound activities…. while still trying to get my own work tasks done on the house construction (ha) … until he grabbed a power tool out of my hand and it caught his headset which quickly wound up around the rotor, and becoming a helicopter headset for a few moments and left him with scratches on his face.

I got heavily criticised and the next day Kadek was back on medication… which I found unfortunate as he did actaully learn from that experience and really it was a “controlled accident” in my view… I could feel something was going to happen at the time and felt a surreal slowing down of time as he reached and took the tool from my hand, (after warning him “Awas!” several times as he was watching me use the tool). I didn’t react or snatch back the tool which could have resulted in more harm occuring… and I just continued being present with him and talking through the experience with him. There was no blood just scratches and a slight bruise from his headset being caught in the rotor of the sanding disc.

From then on he was more careful and always looked to me for “the okay” before he plugged in a tool or turned something on. I don’t know any other way to teach Kinesthetic learners and I’m not even a teacher – I just use my intuition and experience from having my autistic child. The important thing with Kadek is to keep things fun and maintain a sense of adventure and curiosity or else, he becomes defiant. It just became problematic and boring for me having to cop critiscism for even using the sanding tool with him when that’s not a dangerous tool at all – and is more like a  therapy tool which provides sensory feedback and it was actually the most effective way I found to get him to start focusing.

So I did get a bit worn out and burnt out… It took a little while for my nervous system to recover… the feeling being quite familiar to me having undergone the same stress with my own daughter previously while living without support in Australia (and which reminded me of how grateful I am for my current circumstances and the care arrangements and support I do have now for my own daughter).

Kadek has speech development issues and sometimes I think he’s saying something in english so I just reply back to what I heard him say… and somewhere between that and our made-up sounds and theatrical facial expressions we seem to communicate pretty well. 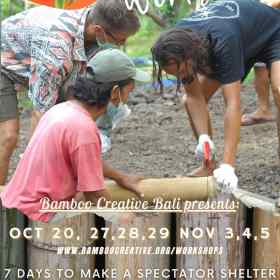