Joel Odongo first contacted me over a year ago, asking my help to support him to make a Community Centre with bamboo and recycled plastic in his hometown Soroti in Uganda. Joel is a fighter, and strong leadership figure and has done so much work to help his community. Having been orphaned as a child, sponsored to go to school by an AID organisation and then studying IT in university, he chooses to help his community at a practical level by creating the Community Organisation TANU (TRANSFORMATION ADVOCACY NETWORK UGANDA) in youth and women’s development to have a place to meet together and create programs for them to become entrepreneurs and escape the cycle of poverty that plagues his community due to lack of resources and education. He has been supporting a community centre that was a room rented in the town of Soroti – but is no longer able to pay the rent there and wishes for this project to become internationally funded and for building to be underway as soon as possible.

During our conversations, and I found out more and more about local life in his home town; things came to mind about how I had lived in Philippines with my daughter when I first left Australia. I asked What they are using in Uganda to cook on – gas, charcoal or firewood and as to Where the cooking is done… and saw several things that may help in his community with everyday environmental health and help to support sustainable practices which Joel started making with his group straight away.

Joel and his community group (TANU) plan to develop a learning program for bamboo building: First bamboo needs to be grown on the community land Once the community centre is built, animal/livestock manure and organic waste will be collected to start a composting project to provide nutrients for creating a nursery where bamboo and other plants will be raised. Areas of the project have been planned out in stages – with water supply being in the first stage to access water from a nearby well through a solar pump that will provide water supply for the nursery and plants as they are planted.

Land has already been granted for their group – which will be able to support 20-30 family projects (30-50 people). Joel has asked me to help raise support so that they may raise a Community Centre building on the land donated to them and to grow bamboo which can be used for both construction and as a firewood/fuel, a nursery to grow trees to revegetate areas around the village, of course vegetables and I have given Joel the idea of growing fish in ponds… And Jackson Buzingo from Tanzania, a Syntropic Agroforestry Trainer, is on board to assist in the training of local youth and women in creating a syntropic jungle on the community land!

Supporting this project will enable Joel and his community to make a Community Centre building (so they won’t have to pay rent for the one they presently use – which has become unsuitable also as the owner wants to renovate the building) that will provide a hub for the Women’s Group and the Youth Group to base their projects from and enable the community group to utilise the 2.5 acres of land that has been gifted to this project by a local Korean business owner. Together the group have made and fired the bricks for the building (over 20,000 bricks!)

So far we have made some zero-cost initiatives such as smokeless stoves in houses (wood is still the main source of cooking fuel in this village) and are traditionally placed inside the house dwelling which creates respiration-health problems. I shared about the smokeless stove model to Joel during one of our chats and off he went into his community and built some of these stoves in people’s homes. I then shared with him the method for making briquettes for cooking fuel (a charcoal made from organic waste) as he mentioned that there is by-product from maize, peanut and rice available from commercial farms in their surrounding area – and this was tried out as a trial product that could be made by his community group. Equipment is limited but some progress has been made and this project is still in development – in need of infrastructure/equipment.

Pictured below: Smokeless stove made in Joel’s Community and the making of Briquettes with organic waste and cassava “glue”.

We request assistance to fund the building infrastructure for this community project: The total amount needed is approximately US$3,000 and this is to buy materials for building the infrastructure for this project as labour is being contributed in-kind. Raising the building, purchase of solar pump, establishment of a nursery and watering system (vegetables, bamboo, agroforestry, re-afforestation). The group has members of the youth who are skilled concrete workers, carpenters and mechanics and your financial assistance is invaluable to enable the work to be done that will create life-changing opportunities for the people of this village in Uganda.

In the next 3-5 years following the establishment of this project, TANU will host education programs for other Ugandans – and also invite you to join their program to experience traditional building from clay using brick and the firing process for making bricks (quite amazing), as well as learn traditional weaving crafts and experience the amazing music of Uganda – which I think is going to be the highlight for Freyr when we can come to Uganda and make a bamboo-building project !! 🙂 Also Uganda is a primary supplier for Shea Butter and we are planning for how we could make a beauty product with local honey and shea butter that could reach the international market… that is locally owned by Ugandan People through this community group project.

I am inspired by Joel’s passion and commitment to his community and have met several of the community members by video call. It is incredibly difficult right now in Uganda with the Covid-19 situation and helping to develop this project could give a lot of people hope for the future – In the past months, Joel has had malaria and typhoid and a strange flu (but not covid) and each time I talk to Joel I just wonder: What can I do to help? The obvious answer is to help raise awareness about his project and the funds needed to get it off the ground: and we have talked about making a tour to his village next year in November so my daughter can experience the music and singing of his culture – and I’m pretty keen to learn about their basketry…

Please Donate to this cause here:

Or enter a custom amount

Your contribution is processed through Stripe and then sent from Natalie Davenport’s Bank Account Straight to Joel through Wise. You can also transfer directly through wise or bank transfer to Joel and contact him through email.

Your contribution is appreciated.

Your contribution is appreciated.

Members of the TANU Community Group have made around 20,000 bricks to use in the building of a Community Centre and request assistance with material/infrastructure costs to raise the building.

The group currently has nowhere suitable to meet and times are getting difficult in Uganda… with funds to build this building, the group can contribute their time and labour to build the building and start projects to help raise income for the community and create livelihood businesses to alleviate poverty and sustain people through the pandemic period and beyond! Joel has recently recovered from Malaria and Typhoid and he looks quite different now in this video – his passion and dedication is mind-blowing.

If you would like to assist /join this campaign and also advise in a professional capacity or help to promote, please contact us through outreach@bamboocreative.org

Here’s where it gets interesting… So I’ve been talking to Joel about creating a community currency so that we can keep track of people’s individual contribution also so they can be recognised in the outcome and overall process of things that later stem from the Community Centre. When you’re operating in an environment where there’s little “money” but lots of “time”, I think it’s wise to see our time as a currency also – and with the youth group having skills in mechanics, concreting and carpentry – and those who will be doing work in the building of greenhouses and maintenance of the plants – it would be helpful that there is a visual of what they’ve “put in” and can have some share of the community outputs. What are your thoughts on this? Ready for a philosophical rave? Too bad – it’s coming:

Since “Western Culture” or those behind the current financial system and valuation of currency came to power/dominated, workers in “Post-Colonised” countries have been payed in very low salary/means – Uganda even still has its currency in “Shillings” – which is like something out of Oliver Twist… We may not see it – coming from our “privileged” upbringing and are certainly not educated/informed about such things during our “schooling” but just take it that the western financial system has always existed and always will – and that it is a “fair” way of valuing various cultures’ labour and products in relativity to each other. Ba-Baw!! (Wrong!!)… It’s been deliberately set up by those in power so that “western” countries have and continue to have dominance over “others”/the rest/those who have been colonised. As Mr Rothschild himself said –

And that is how and why we see poverty around the world at present… It is “manufactured”… (not to mention “third-world debt”) … and a product of the politics of wars which have dominated our history: It’s not natural. And, it’s not ok to see that going to a “poor country” and spending “our money” there is doing those people a favour or for “westerners” to have a “white-saviour” complex and try to “save” people from the situation our very presence have put them in. Western countries have disenfranchised people world-wide of resources – the most important being LAND… but now with the amazing technologies we’ve had the privilege to develop, we NEED to give as much back as we can to uplift the rural poor especially who have had the worst deal out of Capitalism – and if we hope to live in the world from our heart then we need to empower people with the “simplest” things (simple to us who have grown up with a refrigerator in our house) to maintain and develop connection with people, land and soil and the skills that still exist to Actually produce food – (not a pwetty permaculture garden which may yield a few tomatoes) but Real Production! Food – Staples and Vegetables, Clotheing/Textiles, Machinery, House-building…

So Joel and his community are seeing their project as a Revivement Village Project – which in other words – a place to welcome and educate and share experiences WITH others. To help build a community-village from the ground-up. This idea of Community Currency has an opportunity to enable /see a co-investment approach… in building a shared place… without the thought of “ownership” but through the idea of “contribution” and say, for me – helping to build a thriving community where i may visit with my daughter and she be immersed in the musical experience of the culture and tactile experience of activities such as making clay bricks… 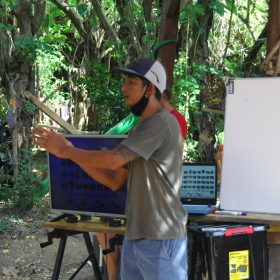 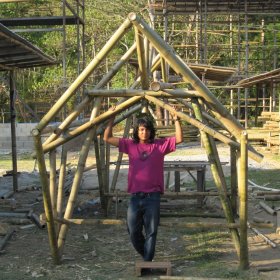