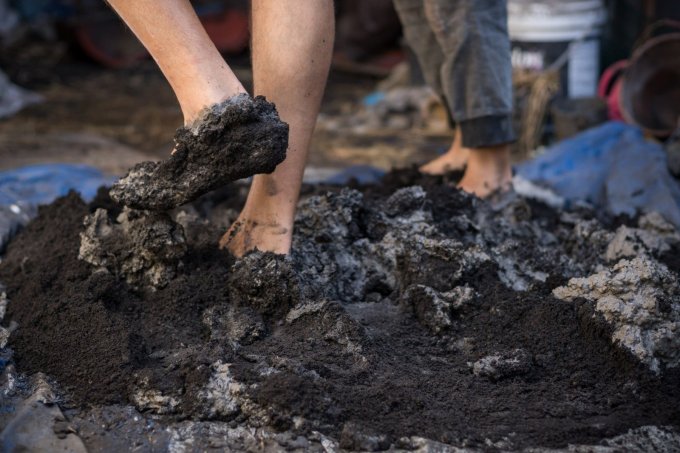 Cob is a building medium made from a mixture of sand, clay and dry grass – it’s the “oldest” building material known to man and “cobbing” is using this mud/clay/sand mixture to make walls to raise a building. It is built onto foundations of stone, which protect the structure when it’s dried from ground-moisture absorption/collapse.

Cobbing does not use individual formwork/molds (as in mud-brick making) but is made by forming logs-balls of “cob” and stacking and melding reinforcement/dry grass between the “layers”. Essentially the strength of the structure is provided by the dry grass which acts like the reinforcement – holding each layer together and acting like the steel in a concrete slab. However, it doesn’t hurt to internally reinforce a cob structure with – yes – you guessed it: BAMBOO!!!… Actually bamboo does incredibly well inside cob as it is protected from the elements of sun and rain – which are the usual culprits that result in the demise/decline of the material (bamboo) in ambient conditions (i.e. unpainted/ unprotected) and potentially could enable thinner walls (i.e. less work and faster drying in the tropics) and more flexible structures to be made in combination, as long as the material is treated against termites to prevent them from burrowing easily invisibly in/through the structure – same as in any building. Bamboo can also be incorporated into the “wattle and daub” method of applying cob to create structures and this will be explored in a series of workshops running in June – September 2022 near Candidasa (ask for more info here).

Ecobricks can be used to “sequester” plastic and create a visually appealing aspect to a cob structure, as can glass bottles. We have been playing with Cob here for a while and are developing a small project program we can take to schools and remote communities to encourage the practice/habit of putting used plastic into an ecobrick instead of the all-to-familiar out-the-window/away habit humans have developed since plastic’s invention. We are seeking support to be able to develop and include Outreach Program participants and local volunteers in taking our training program to schools and villages – as a reward for their collection of plastic throw-away into Ecobricks (and until a better method of plastic disposal becomes available at a broad scale) to make a bench seat/bus shelter with a solar panel on the roof connected to a charging station for mobile phones/devices/torches. We figure that will provide “motivation” to collect plastic and sequester it and keep it out of our rivers/oceans. Read more about ECOBRICKING & ZERO WASTE.

Here is a short video about the process of Cob-making used to build walls onto our building’s structural foundation in the ground level of Freyr’s Bamboo Home/Sky-Kubu in Denpasar, Bali… Xavier Allard from Koluba – a European Natural Building company joined us in January 2018 for a few weeks on his way home from Malaysia to give us some handy instruction for making cob and ecobrick from a straw bale and earth builder’s perspective. We learned the basics of spacing for structural and non-structural walls (also using glass bottles), the basics of lime/calcium plasters and timber/bamboo reinforcement in cob structures.

We’re working on making a more detailed video and hope to make it available in other languages.

CERES Global also joined us in 2018 from Melbourne for a workshop on making cob, ecobricks and basic bamboo handling and techniques for making this cob-ecobrick bench-seat design. CERES has a sister village Sembalun – Lombok (east of Mount Rinjani) which was devastated by the recent earthquakes and have been supporting the community at Sembalun to pilot their own bamboo-treatment facility and production centre – a fantastic initiative totally in allignement with our own principles of empowering local communities to be able to afford and create their own local industries based on bamboo production and were on their way there to learn more about the local ways and culture and share knowledge together. The participants were all Uni students from diverse faculties and together, we constructed an ecobrick bench seat with cob and rock/sand/cement in the bottom and a bamboo and alang alang (grass thatch) roof to keep it from eroding away in the rainy season. We made a formwork so that the entire bench could be made in one day (usually cob must be done in layers and left to dry so it doesn’t “slump”).

Currently we are experimenting with plastering it and growing grass on top to make a pleasant sitting area to recharge one’s mobile phone/torch with a small solar unit that will be placed on the alang alang (grass) and recycled tetra pack roof when completed. I saw this idea on Youtube and it worked excellently! So here’s the video with the follow-up finishing to where it’s at now.

I was first inspired to create Ecobricks while volunteering on the first WIndship build after typhoon Yolanda/Hyan in 2014-15 and with the volume of single-use plastics we have here on Earth and knowing that it’s just going into landfill or worse – the rivers/ocean… something must be done!